I finished reading Necrotic Tissue issue 8, and what a treat it was. They're doing good things over there at NT HQ—nice to see a publication strengthening its position while in the current economic climate many others are consolidating their efforts. 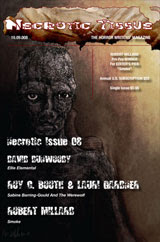 It's a digest sized publication, 112 pages, perfect bound with a glossy, colour cover and black and white interior. Cover price for a single issue is $5.95, while a four issue subscription will cost $20. Obviously, postage costs depend upon your place on the planet.

The stories are of a high quality—though, of course, I'm far too modest to suggest my own story is included in that comment—a mixture of short story and micro fiction. Obviously, all the tales are dark in tone, though some employ humorous undertones just to let the reader know not to take them too seriously.

I particularly enjoyed 'Send in the Clowns', by Bruce Cooper, an 'End-Times' tale with its little gems of imagery like: '…as the clowns came up the hill, a pyramid of them aboard a tiny car like a Shriner would drive in a parade…' and '…beaten to death with an oversized bowling pin. The clown kept hitting him over and over again, stopping only to honk the horn on his hip between blows'. There's an abundance of such fine writing throughout.

The issue's opening tale, 'Ellie Elemental', by David Dunwoody, while written in a totally different style to 'Send in the Clowns', is also a fine read. In the 'Strange Death of Henry Wattle', Jim Kelly takes an outrageous premise and somehow makes a respectable, dare I say it, believable tale. I've never seen the devil summoned in such an anatomical manner!

I like the little interspersions of micro fiction amongst the meatier stories. It means there's always time to get something from Necrotic Tissue, be it a stolen moment or a more relaxed reading session. Natalie L.Sin's 'The Hoarder', for example, is short in length but has so much understated story behind it that it lingers in the mind longer than such a flash tale should.

All the stories in this issue have merit. There are too many for me to comment on all of them, but I hope my picking out some favourites has whetted your appetite enough for you to want to explore the rest.

The Necrotic Tissue website is here
Posted by Steven Pirie at 10:35