Some reviews of Rustblind and Silverbright are now in. Of my story, Not All Trains Crash, reviewer Nick Jackson has this to say:

"Steven Pirie's 'Not All Trains Crash' is a more conventional train crash ghost story but exquisitely related through the eyes of its young protagonists, sisters in search of a truth which has been withheld. A very convincing cast of characters carries the narrative to a most touching finale which is also something of a requiem to the age of steam."

Whilst reviewer Sami Airola says this:

""She feels the clunk of a million points changing lines.” A prose threnody on the half-life of ghosts, so utterly touching, so rail-track rhapsodic, with even education being meted out to those who still survive the tunnels of birth or death, factored into by Dickens’ ‘Signalman’ plus a theme and variations upon a collaboration of the words Rustblind and Silverbright. Here we know.

[Very proud that Steven Pirie's work once appeared in the ancient Nemonymous anthologies with “Mary’s Gift, The Stars and Frank’s Pisser”]."

My heartfelt thanks to all who reviewed and said such nice things!
Posted by Steven Pirie at 19:19 No comments:

My story, Not All Trains Crash, joins a host of train-related offerings from such notable writers as Rhys Hughes, Joel Lane, Andrew Hook, Aliya Whitely, and many more. 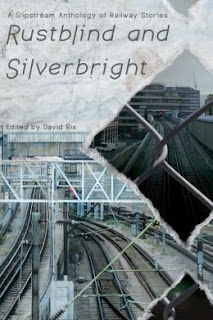 From the back cover:

"Trains occupy a special place in the human psyche. The twin threads of the rails forge ahead from place to place, the ultimate symbol of travel and connection and all the hopes, fantasies, fears, reasons, romance and excitement that come with that. The links between points, the bridges and tunnels, are always so much more profound than borders or walls. And yet you travel these links through a world that is isolated from normal life and unique to itself. The railways are so mundane and taken for granted, passing through the backs of your cities and towns, yet they are worlds that cannot be visited, cannot be known. Worlds that can only be glimpsed from blurred windows or from the far end of the platform. Hidden places. Private places. Places where the ordinary and the secret meet. This was the mood in which Rustblind and Silverbright came into being - a book of railway stories that aimed to look far beyond what you might expect from classic horror or sci-fi. Like any good journey, the scenery of this book is ever-changing. You will ride the rails of language and imagination through many and varied places - some almost unendurably disturbing, some bleak and miserable, some surreal and strange, some touching and moving, some absurd and comical, some exquisitely beautiful. This is a collection that ranges widely from the almost-familiar double-track line of slipstream fiction to the grungy metro of sci-fi and the dark and sparsely served branch line of pure horror, while the squawking locomotives of absurdism jostle with still stranger trains that ride to - other places."

Posted by Steven Pirie at 15:42 No comments:

Recent news on the writing front has been good. More acceptances than rejections has to be positive news, does it not? It's doubly good because for one reason and another I've been through a longish period of not submitting. To pick up the baton again and start where I left off is very encouraging.

First up, my story "The Women Who Point at Men's Hearts" is now available in Sien und Werden's "The Ironic Fantastic" issue. Released in two volumes, my story is in volume two.

I also submitted a story "The Bedroom Ceiling" to Australian magazine Andromeda Spaceways Inflight Magazine and received a super-quick acceptance back which will see me appear in issue fifty eight. This will be my third outing in ASIM, which suggests I'm doing something right as far as they're concerned.

Last but not least, I received email confirmation today my story "Not All Trains Crash" will appear in the forthcoming Eibonvale Press anthology Rustblind and Silverbright.

It's all downhill from here

A less than glowing review of Burying Brian has surfaced here:

Still, you win some, you lose some!
Posted by Steven Pirie at 19:11 No comments:

There be pirates, there be...

And I don't know whether to laugh that someone actually thinks my writing worth stealing, or to cry that someone is illegally giving away a book that took five years of my life to create.

The website is completely in Spanish, and as far as I can see there's not even a method to contact them and complain (I'm sure I could whip up a half-decent bemoan at them using Google Translate).

Take that! There are penguins in Spain, aren't there?

On the legitimate publishing front, my story, The Women Who Point at Men's Hearts, has been taken for the winter edition of Sein und Werden. This was originally written for one of the Shock Totem flash competitions as The Man Who Pointed at the Sun, and didn't poll a single vote (oh how genius so often goes unnoticed, eh? :-)

Also, The Perils of War and Death According to the Common People of Hansom Street is now published in Black Static issue 31, which I understand is imminently available to the unwashed masses.
Posted by Steven Pirie at 10:57 No comments:

I'm just back from six days in Poland. I love Poland at this time of year—it's cold, but it's a dry cold, a different cold from that of soggy Britain, which grips the lungs and tubes unmercifully.

We sat outside drinking cold beer under heated parasols, draped in thoughtfully provided blankets for the legs. It could easily have been summer except the skies were winter-dark and star filled. The chat was good, and being 'close season' there weren't too many tourists to bustle with, which made for a nice, relaxing break. Just the job, really. 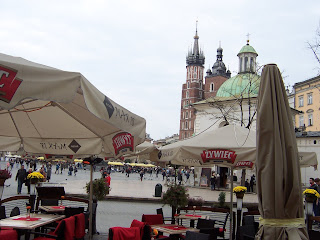 Posted by Steven Pirie at 19:36 No comments:

The Web is a little smaller, today...

I've lost my website. Those terrible terrors at British Telecom have pulled the plug. The web hosting came free with my original contract. I think the word free probably worried BT--they're a huge corporate conglomerate, so such a word is likely to stick in their craw, poor lambs. And clearly they'd decided enough is enough and if I want web space I shall jolly well have to pay for it like everyone else.

Hmff, the indignity of it all.

And now I'm not sure what to do. I mean, do I really need a website? It wasn't exactly buzzing with eager visitors anyway. Is a blog enough to post the odd promotional stuff? Can one turn a blog like this into a virtual website (technically, I mean)?  Or should I look to proper web hosting elsewhere?