A jolt of reality

Part of my day job these days sees me in contact with the University of Liverpool.

This last week has been "Clearing", arguably the busiest administrative week of the university year, in which students who having discovered they haven't quite got the A-Level grades they'd anticipated scramble for ever fewer numbers of places on alternative courses.

This year, and last to a slightly lesser extent, the media hype around government cutbacks resulting in even fewer courses on offer seemed to make applicants even more frantic and frenzied. Within moments of telephone lines opening there was a surge of callers like I'd never seen before, and those elevated levels lasted throughout much of Clearing itself.

So, what's my point? Well, it saddens me that so many young people are turned away from the system. Yes, there is the argument that these students have performed poorly against their A-Level expectations, but then we all know exams can sometimes be tricky beasts, and performance on the day is not always directly related to work put in during the academic year or indeed an absolute indicator of student ability.

And in many ways these people are political pawns. Labour, a mere two years ago set out a vision of 50% of young people given access to Higher Education (which I guess would mean a university place for everyone who wanted one given Higher Education is never going to be the right option for all). Last year Labour reneged on that and cuts began. This year, the new Tory/Liberal mismatch government will go even further.

The children of all the Tory MPs will get in, as will those of all their rich friends. And in the meantime I had to listen to the deflated sighs last week as many young people were told they had no place. Welcome to the real world; check all compassion at the door.

(I should point out I don't work directly for the University of Liverpool, and so any moans and gripes above are purely mine alone).
Posted by Steven Pirie at 20:59 No comments:

Another cruise liner berthed in Liverpool this week (outside Cate's office window – did I mention Cate is a magnet to the rich and famous?). 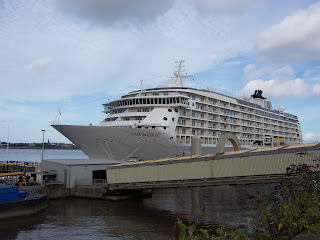 This one is "The World", and it's curious as it's actually a floating residential block. It houses 165 residential 'units': 106 Apartments, 19 Studio Apartments, and 40 Studios, all owned by the ship's residents, some of whom live permanently on board and spend their lives sailing the globe, and others who join the ship as per a holiday home.

What an unusual life that must be—truly they are citizens of the world, though it wouldn't do to sleep walk.

Of course, one has to be stinking rich to join the community (residents must be worth at least two million pounds) and the apartments themselves cost multi million pounds to buy. And I don't suppose they have gardens (unless there're little private coral reefs under the hull), though that boat (picture below) hooked to the side is surely the equivalent of a car in the garage. 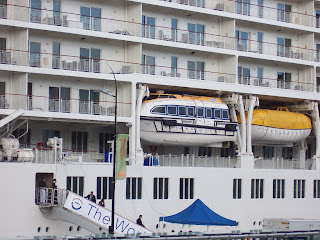 And these guys would probably welcome sea level rises by global warming, because then they can sail into even more worldly nooks and crannies, maybe even straight onto our land-lubber high streets to buy their Gucci swimming costumes (professional shoppers: please feel free to tell me Gucci don't do swimming costumes).

An odd lifestyle, but an intersting one I'd suspect.
Posted by Steven Pirie at 09:04 2 comments:

The Fall by Robert Duperre

A debut novel by Robert J. Duperre, The Fall is the first book of a projected four part series called The Rift.

During the exploration of a hidden Mayan cave, an ancient curse is released. It takes the form of a virus—diagnosed as ‘rodent ‘flu’, but its effect on those infected is more devastating than anything seen before. Insanity, cannibalism, death; all are symptomatic of this ‘flu. There’s panic, and anarchy, and civilisation is on the brink of collapse.

It’s set against this backdrop that Duperre tells the story of Josh and Kyra, who, together with a raft of lesser characters, are forced to fight for their survival, against their own personal demons as well as those quite literally set against them by the rodent ‘flu. 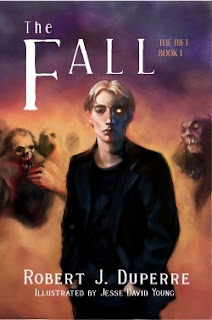 There’s powerful writing here. Duperre doesn’t shun away from the hack-and-slash when it’s needed, but The Fall is much more than a horror flick. His characters are torn inside as well, and such internal angst adds depth and realism where some horror novels seem to rely upon shock alone. Josh must kill his beloved sister, for example, when she is struck down with the virus, and Duperre has him do so with restraint and poise and humanity, despite the fact that Josh has witnessed the horrors this same sister in her insanity has levied upon their parents. There are internalised debates, too—how much would you save others in such a situation as this, and how much do you save yourself?

Add to this that there’s a surreal thread building; that there’s a gathering force of evil; that the dead will walk; that Josh is visited by a vague-talking, ethereal woman who we can perhaps guess is some balancing force of good; that between them we have hints that Josh is more than he perceives himself to be, and it’s clear the Fall has a nice balance of intrigue to keep things moving along into subsequent volumes.

In this opening to the series, the seriousness of the situation is gradually expressed and increased. The book ends with the decision to leave, and we are left waiting for the next instalment to see what and to where this journey will lead.

With the added bonus of some excellent illustration, this is a strong opening to the series indeed.

The Boy in the Striped Pyjamas

We watched the film "The Boy in the Striped Pyjamas" last night. Made in 2006, it tells the wartime story of a friendship between a German boy, the son of an extermination camp Commandant, and a Jewish boy who is a captive of that camp.

Of course, like all good films, there's so much more than that going on, and the film explores the conflicts of such a time in a refreshingly non-preachy way. The Germans are not all monsters. The mechanics of what went on is not presented judgementally and in gory detail. In fact, for swathes of the film the camp is something of a minor character; a nagging "extra" lurking at the peripheral. 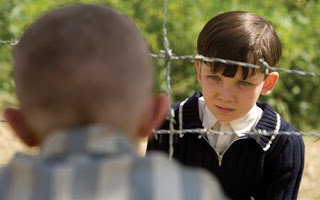 Without wishing to spoil things for those who've not seen it, it's one of the few films I think I've seen with a less than happy ending. With that in mind, the ending shocked me a little. Yet, thinking about it later, it's the perfect ending—the only ending that could be sensible. 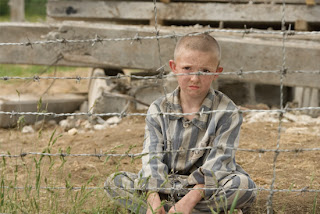 If you've not seen the film you should dig it out—even if you find the subject matter a little un-nerving (or especially so, perhaps). As an exercise in story telling it's worth the entrance fee alone.
Posted by Steven Pirie at 09:59 3 comments:

I booked my flights to Poland. I booked my hotel in Poland. And now I feel all excited, because it's not just an idea any more, it's real.

I won't say when I'm going, because if I do there might be a small crowd of house burglars helping me into my airport taxi.

I've tried Polish food and it's awful, so unless I end up living in McDonald's I might even come back a few pounds lighter!
Posted by Steven Pirie at 09:41 No comments: