Your own legs, please.

It's back and ready to go, and once more the universe is in grave peril of imploding up its own black hole.

I'm talking, of course, of the newly repaired Large Hadron Collider, or LHC as it's affectionately known, that most humungous of doomsday machines built deep underground at CERN in Switzerland. 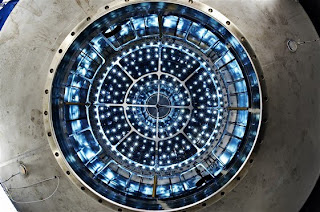 I wonder if the media hype surrounding the switch on will be as intense this time around. Last time, the media interest was almost insatiable, as we watched the CERN scientists don their eye goggles and lead underwear, as they shoved a thumb against the big green 'on' button (it has to be green, surely?) and we all sat back wondering if the world would still be here come lunch time. 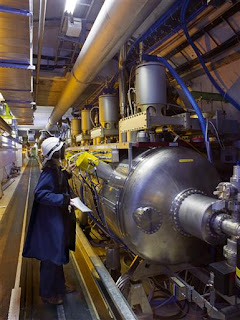 A CERN scientist searching
for the big green 'on'
button, yesterday.

It's all in search of the Higgs boson, don't you know. As bosons go, it's the kiddie. It's even been christened the God Particle. So, there's no megalomania there, then.

"Yes, yes, Steve…" I hear you mutter, "We're not all as stunningly clever as you, so just what is a boson, anyway?".

Bosons are 'force mediators'. When two particles interact, they do so by passing a boson to each other. Two Neutrons feel the love for each other in the 'Strong Nuclear Force' by exchanging a Gluon. Electromagnetism is mediated by photons. And Higgs… well, that's predicted by Physics' love with symmetry, and if/when found will be shown to mediate matter's fixation with 'mass'. And where would we be without mass?

The problem with particle physics is that each layer of symmetry requires more massive particles, and more massive particles require ever higher energies to detect. The accelerators have to be bigger and better each time to probe ever deeper. And now, given that the LHC is one mean machine, there is a theoretical possibility that the LHC might have enough oomph to create a black hole. And a black hole on the tabletop could do one of two things: it could fizzle out, or it could consume the solar system. Hence the call of the Doom-mongers.

Of course, said Doom-mongers don't mention that incoming cosmic rays collide daily with particles in the upper atmosphere at far higher energies than can be coaxed from the LHC, and so far the solar system has remained conspicuously absent of black holes.

It has made for some interesting conspiracy theories, though. Several scientists have suggested the breakdown of the LHC was not accidental, and rather it was engineered by a future bent of self-preservation. The future, it seems, can not, and will not, allow the machine to work. It's a pity the future didn't intervene sooner, before we'd spent billions on the thing. Typical, eh?

The latest glitch was apparently caused by a 'bird from the future' dropping a bit of baguette into a surface substation and causing a power outage (I kid you not). 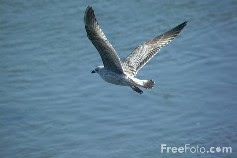 A bird from
the future, yesterday.

Add to all that accusations that at least one CERN employee had links to terrorist cells, and surely this soap opera really is stranger than fiction. I shall be watching events with interest, with head between the knees, of course.
Posted by Steven Pirie at 10:13

Since you caried out your review of CERN ZOO, we have established it was a pre-existing term and that the Collider's sabotage of itself is fully formed within its pages - and, perhaps inexcusably, that he Cerne Abbas chalk giant had a 'hadron'.
See various CERN ZOO posts recently where these and oher things have unfolded.
I, too, have my head between my legs.

I always said you were visionary, Des, and now this has proved it!