What's in a name?

Why is it that women's hair salons lend themselves so easily to clever, play-on-word names? Is it a kind of statement of artistry, that if we can think of a spiffing name like this we can do wonders with your fringe? Is it a strictly British thing, or is this true the world over?

I mean, butcher's shops are so often called... 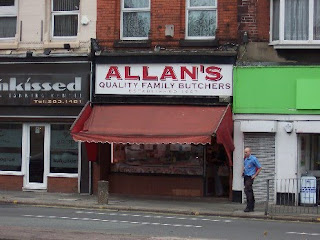 ...not Mincing Malcom's, or Who's For The Chop?, or From Hare to Eternity.

You know what you're getting in Allan's butcher shop--good honest pork, nothing more, nothing less. The pedant in me loves it that the placing of the apostrophe is bang-on. It makes me want to applaud Allan's sausages. I want to laud Allan's liver. Am I alone in flinching whenever I see the 'Grocer's apostrophe'? Do you blanch at such punctuation abuse? Anyway, that's probably for another post.

Fish shops are called "Bob's Fishmonger" or something, not Your Plaice or Mine?, or In Cod We Trust. 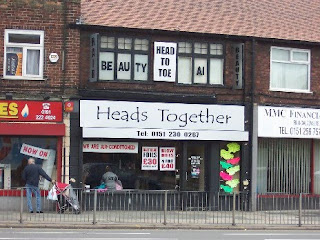 I Googled, and found loads of wonderfully named salons locally.

I like Hair Razors in Newton-le-willows, and the delicious Hair World. There's Q'Dos in Toxteth, cudos on that name, and Cut and Dried, and Hair 2 Dye 4, which I guess appeals to the Twitter, texting generation. There's Mane Attraction, and A Cut Above, and Million Hairs... the list just goes on and on.

I'm intrigued by Woman More Than Nails Ltd in Bebbington. What can that mean? Is it a play on some quote I'm not aware of? It seems a strange combination of words to be not deliberate. It's an existential statement--we are women, and we are more than nails. They'll be after the vote next.

And what about Envy Hair and Beauty, in Birkenhead? Do the women all hiss at each other as they go in? Cardinal sin and curlers all under the one roof? A potent mix, I should think. But not to worry, women, because after such sinful encounters, Hair Angels can be your salvation.

And speaking of good names... 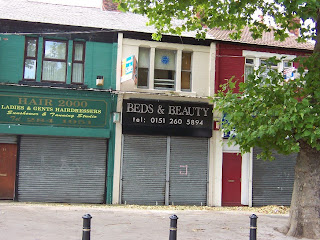 The concept of Beds and Beauty is surely a male creation. Never mind all that romancing rot, this shop is every man's one-stop route to procreation--beauty to bed with ne're a hint of roses in between :-)

Thinking about this afterwards, I guess 'Beds' is the Sun-bed-set parlance for 'Sun Beds'. Or, given there's not much room on the sign to get 'Sun Beds' in, it's simply truncated. All of which is much more mundane than what goes on in my furtive mind behind those closed shutters.

Of course, 'Hair 2000' next door is probably not the best of names. What woman wants a 2000 do? Surely she'll want the 2009 version? Or, if she's the sharp-suited go-getter, she may even want the 2010 style now. A lot's happened since the year 2000--the towers have fallen, the markets have collapsed, a black president in the White House--so that has to be reflected in hair styles, right? 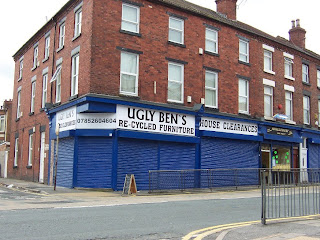 Ugly Ben's? Did someone name this shop without Ben knowing? Did he commission his sign writers and leave them to it? Maybe it was originally simply "Ben's...", but Ben didn't pay his sign writer, and said sign writer popped back in the night with his ladders and paint pots and the smirk of revenge on his lips.

This picture was taken on a Sunday. Clearly Ben doesn't open Sundays. Possibly he's busy beautifying himself for the week ahead. Perhaps he's out hunting down his sign writer, with a number three mallet and a re-cycled Queen Anne chair leg held aloft. Or maybe he's busy over at Beds and Beauty.

Of course, Ben has it sorted. The naming of his shop is an instant hook. People passing by on buses won't fail to do a double take at the name. As a writer, it's probably this 'notice' aspect that interests me in shop fronts. A writer, after all, is in the same 'hook' business.

I should change my name to Ugly Steve.

What do you mean you totally agree?
Posted by Steven Pirie at 10:04