A Brief History of Here 4

There's a gem of a cemetery, one I'd no idea previously existed, to the rear of the Anglican cathedral. Named St James' Gardens, it's a former quarry site which became Liverpool's main cemetery in 1825 and is now listed as a public park. Of course, these days there are bigger, more modern sprawls to home the dead. But this cemetery has real character.

It's below ground level, for a start, hidden away almost and which possibly explains why I'd not discovered it before, accessed at one end by a tunnel and ramp. 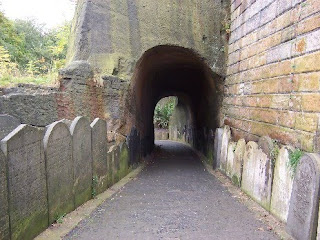 I love the thought of a tunnel leading to a graveyard. It adds a sense of journey, of mystery. And that the ramp is itself lined with graves gives the odd experience of having to walk over buried bones just to get into the place.

There's food in that for a horror writer surely.

Beyond the tunnel, there's the Dead's Council. It's a curious circle of graves that in my mind becomes a meeting place. 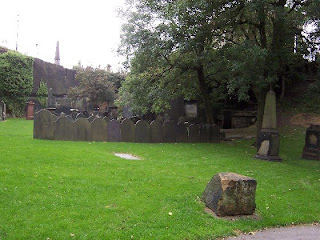 Here, the dead might decide if they'll permit me further into their domain, or whether they'll rise up shrieking and send me running homeward.

Maybe on occasion they decide to keep the living who stray here. Perhaps the dead howl as the tunnel slams shut. Perhaps that's when they feed.

I really should Photoshop this picture. The green grass and daylight doesn't do it justice. It should be dark and misty, streaked with ghosts, and monks lurking, stooped against a squall of rain. 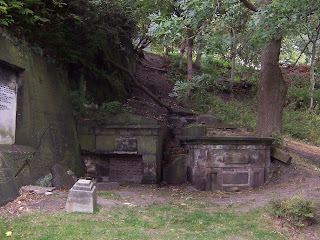 Some of the tombs appear older than 1825. And in truth that only adds to the charm of the place. These two flank the Oratory, formerly a mortuary chapel for the cemetery. The inscriptions are so worn and chipped I've no idea whose bones are laid here.

There are some notable graves, though; William Huskisson (1770-1830), for example, Member of Parliament for Liverpool in 1823. He has the rather dubious honour of being the first man ever killed by a steam locomotive.

I suppose it takes someone as self-absorbed as a politician to fail to notice a 100 tonne lump of metal rumbling, hissing and steaming towards him. Still, I'm sure it was an unusual demise, particularly in those times.

Even in daylight, there are places here permanently dark and shadowy. 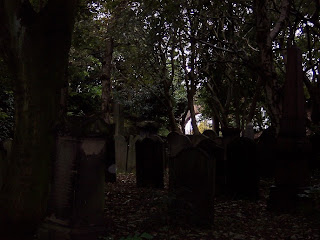 I imagine the dead would walk here all day long, never mind waiting for the decency of witching hour. There are ghosts; look closely through the gloom under the branches. 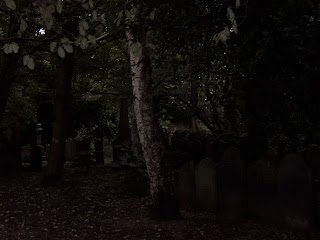 And what had these people done in life to be denied the sun even to warm their headstones in death?

This surely is a sinners' patch; of murderers, and cut-throats, and black-cloaked vagabonds.

And these old trees growing outward horizontally from the bank, again lined with graves, must make an eerie sight on wintry nights. They could hang careless interlopers like me from those limbs. 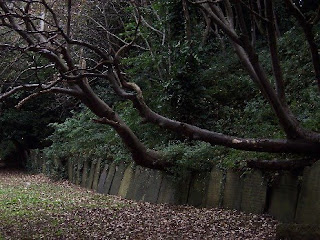 It's an atmospheric stroll indeed. But a word of warning should you visit Liverpool and look for St James' Gardens—there are some dodgy characters down here, living I mean, not dead. The Red Light District is close by, and my reverie was disturbed by a woman clearly of disputable honour leading some fresh-faced boy to the slaughter. I was also approached for a cigarette by some character whose pupils couldn't safely dilate further.

Maybe the dead don't mind this—I suppose you get your entertainment where you can when dead—but it is something to be wary of. And it's a shame, because otherwise the place is secluded and peaceful.

Apart from the wail of ghosts, of course.

How weird, I didn't know it was there either, though I've never visited the Anglican cathedral either.

I am so going to have to go there sometime - with a bodyguard of course.

It's definitely worth a look, Cate.