This has to be the most camp statue I've ever seen. Approaching it from its right, it looks all rather heroic and steeped with derring-do. But when one gets round the front, one realises it's really just some bloke and his sword loitering about waiting for a boyfriend with a beard fetish and a love of metallic tights to show up. 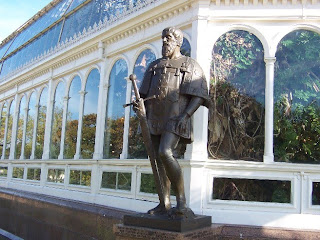 In truth, I rather like the idea of gay warriors. Warfare would be less brutal, I should think, were it a requirement that all the participants be gay. There'd be a bit more hair pulled out, I suppose, and some hurtful fashion comments tossed in, but not so many soldiers coming home in boxes. I think I should write a story about a gay army. I wonder if I can make it humorous without resorting to worn stereotypes and tired homophobic stuff.

The statue stands outside the rejuvenated Palm House in Sefton Park, one of Liverpool's oldest and grandest public parks. I'm not entirely sure whose statue it is. The name is written on the plinth that forms part of the statue proper, but I can't make it out in the photo, and rather foolishly didn't take notes. If I pop back there at some point I'll edit in the identity.
Posted by Steven Pirie at 12:04

I'm sorry, but I laughed my way through this entire post. Hilarious!