The Fine Art of Tribal Warfare

We're off to the football match, James and me. It's Everton versus Tottenham Hotspur—they're fourth in the league, we're sixteenth, and we're not in the best of form right now, so in theory we should lose.

But, it's a funny game, so who knows what might happen?

When you think about it, it's an odd thing following sport. I mean, we do get rather fanatical about it, but really it's celebrating someone else's achievement—the eleven often petulant millionaires kicking the ball about on the pitch. But there is some strange emotional attachment that's really hard to put into words. If you're not 'into' sports, and so you've never felt it, I don't think I could ever really explain it to you. But it's real and almost palpable.

For ninety minutes, we kick every ball with those highly-coiffeured an pampered individuals; we feel every ounce of pain; we offer threats and the loan of spectacles to the referee. Maybe it's a tribal thing, a throwback to a more primitive age. But, if so, why do I feel it?—I have no other Neanderthal tendencies—I hardly ever drag the wife around by the hair and hunt bison wearing nought but a loincloth. Perhaps it's more of a 'club' mentality. Maybe we all just need to belong.

And I saw that emotional thing dawn in James. The first half-dozen games I took him to he spent more time engrossed by the antics of the crowd rather than the game. But at one match I saw an abrupt change in him. He suddenly took a greater interest in the game itself. He felt it in himself—even at that tender age—because he actually turned to me and said: 'Daddy, I can see what you see in this.'

And we smiled and shared a nodding, father-and-son moment.

Now, he's a walking encyclopaedia of all things Everton. In fact, not just of Everton but of all things Football. He puts me to shame with his knowledge.

We're at the match. Oh, I'm relating this later, of course, as not even I am daft enough to sit in a football ground tapping away on a laptop. I'd probably be labelled a dangerous intellectual, if I did, and be made to stand at the back. It's cold, and wet, and I'm wondering what we're doing here, particularly as the game is being shown live on television. But that's what sports fans do, brave the elements.

James has a hotdog, and I've got a pie of dubious content. The theme tune blares—Z cars—and crowd roars and the teams enter the pitch. This is why we come, as we stand proud on the eve of battle, our hotdogs and dubious pies raised aloft in salutation. 'No prisoners!' is the cry, or something like that, and we take our seats and await the contest unfold. More warfare should be conducted sitting down. It's hard to invade Poland on a seat. Spurs kick off. Everton can't get the ball back. Some things never change. 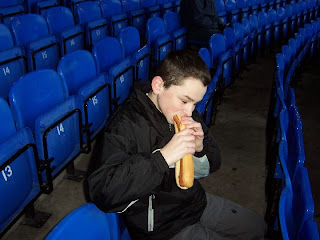 We've been to the match. It finished 2 – 2. It was all very exciting, with the Everton goalkeeper making a last minute penalty save, and Everton coming back from being 2 – 0 down. It was a bad tempered affair, which of course makes it all the better. But no one got hurt (apart from one player who was taken off on a stretcher), and with a tied game the spoils were shared, which is more than can be said for most tribal warfare. And we'll do it all again in a couple of weeks time. 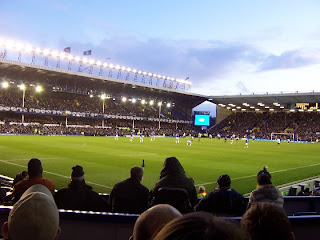 Come on you Blues!
Posted by Steven Pirie at 21:16