After much tinkering and tutting, formatting and fist-waving, my first novel, Digging up Donald, is now available for the Kindle at Amazon.

Basically, it's a sprawling plot of a comedy that tells of a small town, semi-rural England family and their fellow town's folk, and how they might battle the demons of Armageddon. In it I wanted to explore just how far I could place the ordinary alongside the extraordinary, and if I say so myself the tone of the tale is unique. It forced me to find that elusive entity, my own authorial voice. 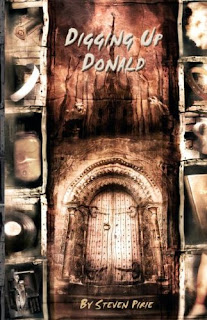 "It was biscuits at ten paces."

I really love that opening line. How can anyone battle with biscuits? Only where the ordinary meets the extraordinary.

The novel was first published in hardback in 2004. It then saw release as a paperback in 2007. The sequel (though in truth it's more of a second book in the same universe), Burying Brian, will also be on Kindle soon. Along the way a number of people whose opinion I respect have said some wonderful things about Digging up Donald.

"This reviewer found himself
dreading finishing the book - it truly
is that entertaining a read."
Kevin Etheridge,
The Horror Express

"Pirie's book is a shot in the arm of a
jaded genre and if there's any justice he
will be welcomed with open chequebooks by
the devotees of comic fantasy."
Peter Tennant, The 3rd Alternative

...the best book I have ever read in my
entire life...
Garry Charles, Amazon.co.uk review

Links to Amazon are below, and thanks for looking in should you choose to do so:

Amazon.co.uk
Posted by Steven Pirie at 18:35