There's a rather stunning review of Burying Brian to be found in issue four of Shock Totem. 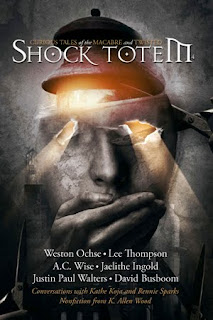 "The Prose Pirie uses is clever, never dull, and brings about a sense of poignancy that does what the best literature is supposed to do—make you think."

I've known Rob online for some time now. Indeed, I'm a fan of his own no-nonsense style of writing in his blossoming trilogy The Rift

And it's not the first time Rob has offered assistance in building my writing career. Back in 2004, when I'd just had Digging up Donald published, Rob and his now wife Jessica Torrant helped place Donald in an arts festival in which they were involved.

It's a feature of the writing community that there are nice people like Rob and Jessica around who are selfless in the willingness to help out.

So, thank you so much, Rob, for the review and your continued support.
Posted by Steven Pirie at 10:13