I was wandering the shelves of Waterstones in Liverpool, as one does, when I spotted "Pretty Little Dead Things", by Gary McMahon. I had read and enjoyed some of McMahon's short fiction down the years, and I'm always happy to support a small press author's push for greater things, so I bought a copy. 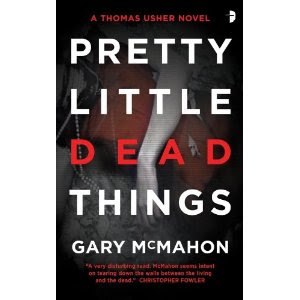 Overall it's an excellent read. Thomas Usher, following the tragic death of his family, finds he has the 'gift' of being able to contact the dead. Or rather the dead may contact him, for Usher's lack of control at such contact is a large part of the book's charm. Set loosely in Leeds, it's a grim story throughout, as Usher's battle with his own inner demons is nicely paralleled to those external ones bent on destroying the world.

McMahon displays great skill in weaving Usher's emotions into a story that's something of a page-turner at times. If I have a criticism then it's with the ending. Usher is spirited off to 'other places' for the final showdown, and events become somewhat surreal. I'd have thought given Leeds, or indeed any northern city, has enough nooks and dark corners for a final showdown between good and evil without resorting to such devices, the story could end where it is staged—sometimes painfully close to reality.

But that's not to detract from what is a very enjoyable book. And good luck to McMahon in breaking through into 'bricks and mortar' book stores!

You can buy Pretty Little Dead Things at Amazon.co.uk

And here at Amazon.com
Posted by Steven Pirie at 09:08