Well, we went to Poland. And, perhaps more surprisingly, we managed to get back home again. And I spoke Polish—actual Polish—and people understood me; I was even complimented on my Polish—what a thrill that was (I'm a man of simple pleasures).

We flew into Krakow. It's a city in flux somewhat. On one hand, it's a beautiful city blessed with many churches and buildings of fine architecture. But on the other it's also reinventing itself as a vibrant city, of nightclubs and bars and restaurants, and in some ways there's a battle going on between this old and new façade. It made for an eclectic bunch of visitors—young groups on stag and hen weekends alongside mature tourists all cameras and city guides. 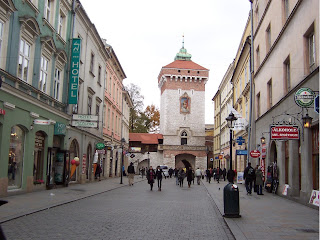 It was cold—minus one degree in the evenings, but still hardy souls were to be seen sitting drinking chilled beer under parasols at the pavement cafes along the Rynek or Main Square. Ann and me, well, we're made of lesser stuff, so we drank our beer inside in the warmth. 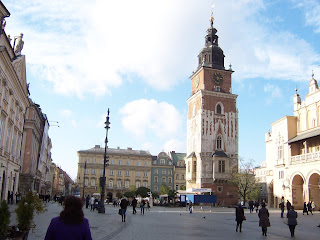 I'd certainly recommend visiting Krakow. The food was cheap, the beer was cheap, and the majority of people friendly to a fault. Most spoke some English, and even those that didn't still managed to maintain a dignified patience during the ensuing pointing and arm-waving. 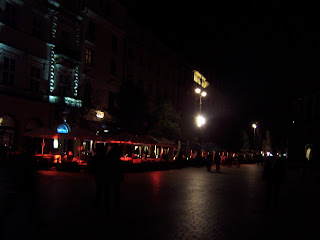 There were pockets of poor customer service we were generally warned about before we left. These were remnants of the communist age—the railway station was a somewhat daunting, unfriendly place, with little information and few official people around to ask for help—where wages were poor and paid no matter the attitude of the employee to the task in hand. We also had problems buying paper tissues in a chemist shop, but I suppose even pharmacy workers can have a bad day. 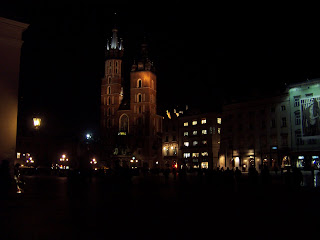 But overall, if you've any thoughts of going somewhere different, you should consider Krakow.
Posted by Steven Pirie at 09:44