We braved the weather and were rewarded with 'not a bad day for it', and took a drive into South Yorkshire. Our destination was Holmfirth, a small town set deep in the countryside and home to the long-running (actually, longest running) television sit-com "The Last of the Summer Wine". 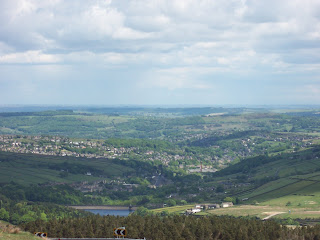 I'm a big fan of the television show—it's the kind of gentle comedy I like to explore in my own writing. It's sad that many of the characters who made the show what it is have died off in real life. The show goes on with new characters, and it remains in my opinion still pretty good, but the old ones are tough acts to follow. 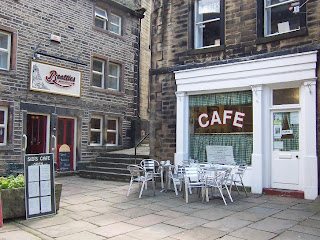 We took coffee in Sid and Ivy's café. It's more or less as it appears in the show, although unlike in the show it was packed with tourists. I felt foolish in selecting a sticky bun only to be told it was for display only. Well, it looked real enough, and it was probably in keeping with the show.

The town itself is rather small. We walked around it, twice, and barely broke sweat, but of course its quaint charm is that it's not the city. 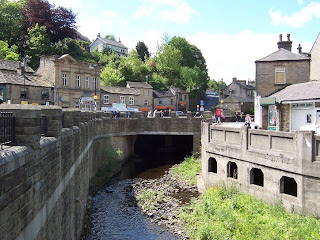 We went up on to the "moors" for lunch, and found a Coach House serving overpriced food that was tasty yet overall disappointing. Still, it's a gamble when one doesn't know the area, I suppose.

This was Saddleworth Moor, backdrop to the infamous Moors Murders of Ian Brady and Myra Hindley. Such a bleak place, it's easy to see how bones can lie here undiscovered and brooding. I want to come back here at night, to experience this place in darkness. I imagine it's an eerie place to be in the dark. 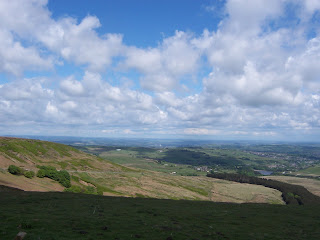 So, there's no great message in this post. It's just a day out. And why not, eh? Sometimes, simple days out are what the soul needs.
Posted by Steven Pirie at 09:29