A Brief History of Here 3

"If you want a cathedral, we've got one to spare…"

So says the line from the folk song, "In My Liverpool Home". And it's true, when it comes to impressing God with big, airy buildings, Liverpool is way ahead of the competition—there is indeed not one cathedral, but two of the buggers.

They sit merely a half-mile apart, each filling the skyline in their own way, two great behemoths to organised religion staring down at each other, big enough to dominate the mere mortals scurrying about below. Which is what it's all about, really. 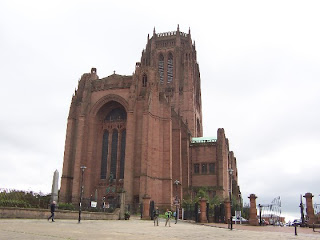 Both are relatively new buildings. The Anglican cathedral is the more conventional in form. It's a Gothic styled creation, built with four annexes about a central tower, itself a crucifix of brick and mortar. Its design was by Giles Gilbert Scott, a controversial choice when it was revealed that Scott was himself a Roman Catholic. The foundation stone was laid by King Edward VII in 1904, but warfare and escalating costs meant it would be seventy-four years later before the cathedral was declared finished in 1978. 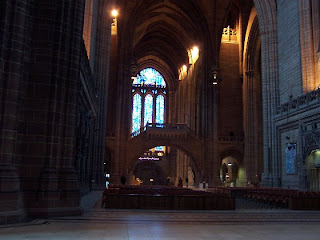 Believer or not, it's hard not to be awed by the sense of space inside. Unlike the Roman Catholic cathedral described below, the lighting, while provided naturally in part by large stained-glass windows, is much more muted; much more in keeping with what you'd expect in a church. There are nooks and shadows, here, places where saints might lurk or demons hide.

The Roman Catholic version is more adventurous in style. "Paddy's Wigwam", is its rather derogatory nickname, based around the large Catholic Irish population of the city, and, of course, the general shape of the building. 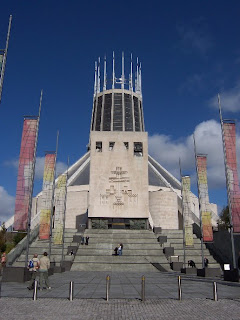 It was designed by Frederick Gibberd, and building began in 1962. It took less than five years to build, opening in May 1967. While it's not nearly as 'roomy' as its Anglican rival, you have to love the 'feel' of the place. The lighting inside is both subtle and stunning. 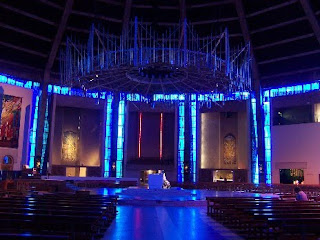 I was raised Church of England, but were I now a religious man I think I'd prefer to worship at the Catholic cathedral, simply because it has a more intimate feel to it. 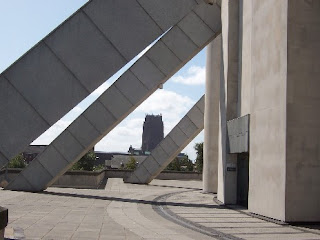 I've never felt there to be a difficult rivalry between faiths in Liverpool, certainly not between Christian denominations. It's not like in Ireland, or perhaps Glasgow, a city itself much compared to Liverpool through the years. Others have suggested problems have been rife, but it's not something I've found personally. 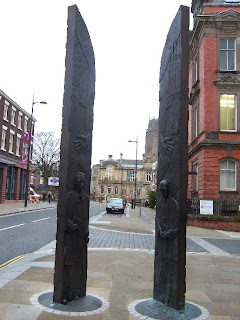 This is a statue, or a pair of statues perhaps, of David Sheppard and Derek Worlock, who were the Bishop and Archbishop respectively of Liverpool in the 1990's. The statue was commissioned in 2005 to celebrate the work both did in unifying the church in Liverpool. It stands midway between the two cathedrals, and takes the form of a door that opens to reveal both in each direction.

This is the view looking toward the Anglican cathedral, whose tower can just be seen behind the buildings to the right.
Posted by Steven Pirie at 21:02