A Short History of Here 2

A friend of a friend of mine was beaten unconscious a week ago.

I've not seen the report in the press; possibly the police are keeping things quiet if their investigations are at a delicate stage. She, yes, it was a female, was beaten up in the city centre because she dared to pull a drunken youth back from an oncoming taxi cab. She saved the youth injury, and in return her jaw was broken on both sides, she lost most of her back teeth, and God knows what mental anguish will result. There are also some suggestions that a girl who was with the youth stole money and a mobile phone during the attack.
Scum, eh?
It's hard after that to sit here and say how wonderful Liverpool is. Clearly, it's a dangerous place to be. But, of course, so can be anywhere. There are violent sumbags lurking in all our cities, and the trick is to be wary and ever vigilant, sad though such a sentiment might be.
And for the record, I've been down town many, many times--I've lost count of the number of times I've even walked home at two a.m. in my youth---and never seen the merest hint of trouble. 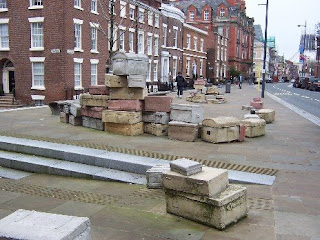 This is the 'suitcase' sculpture in Hope Street. It's a work created by John King, and each suitcase is labled to belong to a famous Liverpudlian. It's a celebration of Liverpool culture, yet given the opening tone of this posting, I think there's a certain irony that maybe these suitcases are packed so Liverpool's famous can get the Hell out as soon as they're able.